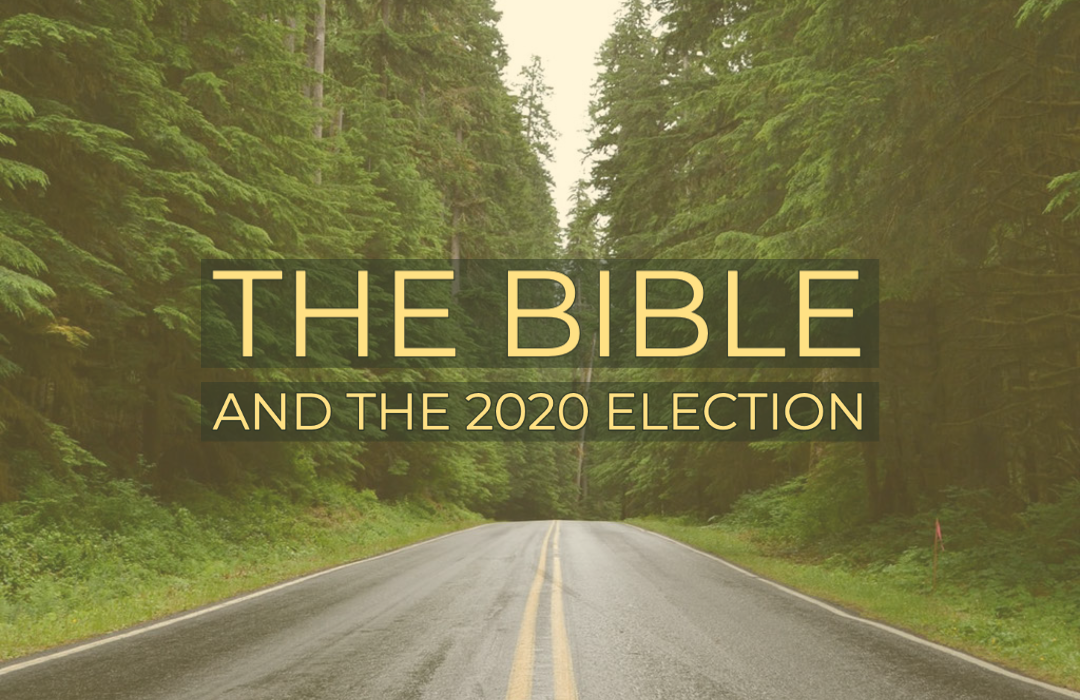 You won’t find anything in the Bible explicitly stating that you should or shouldn’t vote.

But that’s not to say that God doesn’t care whether we vote. I’d like to examine a handful of biblical passages that offer us guidance on this matter and—I believe—make a cumulative case that we should indeed exercise the right and responsibility to vote in the 2020 election.

To begin with, look at how God makes provision for the basics of human government in Genesis 9:5-6. He says, “I will require a reckoning” for the life of every human being. That is, in God’s mind, every human life is precious because each and every man and woman is created in God’s image. Therefore he will require just retribution any time that one of his precious human creatures is killed.

But then notice who will exact that just retribution. “Whoever sheds the blood of man, by man shall his blood be shed.” In other words, God is establishing a system of capital punishment. And it’s not the same thing as honor killing or revenge. It’s God’s justice that must be satisfied, not man’s. But this justice is administered by a human instititution (namely, government).

Paul mentions this governmental responsibility in Romans 13:1-4, where he asserts that those in authority “bear the sword” as servants of God, whether they acknowledge God or not. The “sword” in this passage is a symbol of the threat of lethal violence, whether through the waging of just war or the execution of capital punishment.

In Acts 17:26-27, Paul tells the Athenians that the reason God does this is so that human beings everywhere might seek him. In other words, God is always working to reconcile human beings to himself, and in spite of the frustration we feel toward the government—in spite of the injustices perpetrated by many governments—the purpose of God’s establishment of nations and borders and boundaries is actually to create the circumstances in which human beings turn their attention toward their Creator.

In fact, this is the very thing that we are commanded to pray for in 1 Timothy 2:1-4. When governments promote peace and justice, when they fulfill their divinely ordained purpose, God’s plan to reconcile the world to himself flourishes, and many are given the chance to hear that "there is one God and one mediator between God and men, the man Christ Jesus."

I glean two very important principles from this collection of passages.

1. God ordains governments for his own good purposes.

2. Just governments create opportunities for human beings to turn to God for salvation.

Think about what this means practically:

This means that political engagement is not exclusive to our primary mission to make disciples. If we wish for all men everywhere to come to the knowledge of the Savior, then it stands to reason that we should follow Paul’s command to pray for a just government that will foster peace and freedom, because this is what is going to create prime opportunities for the spread of the gospel in the world.

And if it is appropriate—indeed, if it is commanded—that we pray for the cultivation of just government, then it stands to reason that we should act toward such an end as well, that we should consider our own context, our own opportunities to advance such an objective, and within the parameters set by the Word of God, act in such a way as to increase the likelihood that just government prevails.

I imagine that the new Christians converted under the ministry of the apostle Paul responded to the gospel in just this way.

All of these groups of people, mentioned in the New Testament, found themselves embedded in imperfect governments as followers of Christ and must have begun to do their work as unto the Lord, and not to please men. They stayed put and served God as ambassadors for Jesus in a world subjected to Satan.

Another set of principles can be gleaned from passages like 1 Peter 2:11-17. Peter tells us that we should “be subject for the Lord’s sake to every human institution.” His counsel echoes similar statements by the Apostle Paul in Romans 13, a passage we’ve already considered. This is our third principle: the clear teaching of the New Testament that

3. Christians ought to submit to the authority of government under God.

In the first century, this meant submitting to the taxes and the ordinances of the Roman government and its provincial hierarchy. Authority rested ultimately with the Emperor, who delegated his authority to prefects and procurators around the Mediterranean basin.

Obviously our context is different. Instead of a government centered upon a single ruler, we live in a context where authority ultimately rests in the citizenry, in keeping with the principle expressed in the Declaration of Independence that governments “derive their just powers from the consent of the governed.”

The point I’m making is this: If, in the first century, Christians were commanded to submit ultimately to the emperor, shouldn’t those living in the United States today apply this principle by submitting not only to the written law and to our elected leaders, but also to the governing body from which that law and those leaders derive their powers, namely, its citizens?

And doesn’t it stand to reason that if the ultimate governmental authority in our context is the citizenry, that to submit to such an authority would entail taking our place alongside our neighbors in the very exercise of that authority by casting our vote?

The Old Testament book of Proverbs in particular is compiled by a king for his sons who may one day ascend to the throne.

Why is this relevant to the question of whether or not we should vote in the 2020 election? Because the authority of a king is actually very similar to the kind of authority distributed to the citizens in a democratic republic like the United States. Kings delegate their authority to executives and magistrates and local or regional representatives. A voting populace does the same thing.

Now, you may not feel like a king. If you’re an eligible voter, you share this authority with millions of others, and so you may be tempted to feel as though the authority you wield is relatively worthless. But this does not absolve you from the responsibility to rule well. It’s not a question of power. It’s a question of responsibility.

And so, that which the Sage applies to kings in the book of Proverbs applies to those with such authority in the United States:

Can you imagine a king who stays in his castle when a war council is meeting on the front, or who remains silent while his nobles oppress the poor, or who allows somebody else to choose his generals and deputies? What kind of king would that be? Certainly not a just king.

And how can we, though we possess only a sliver of this kingly authority, simply allow others to take these responsibilities off our plate?

And that leads us to a very practical fifth principle:

5. When the righteous are silent, the wicked rule.

When we take our talent and bury it in the sand, so to speak, we squander our opportunity to speak for justice and oppose the advocates of evil.

What do you think would happen if all the righteous decided not to vote? The only voice left would be the voice of the wicked! How do you think that’s going to go? Will the lack of participation be perceived as a protest against an unjust and broken system, or as a settled apathy that gives tacit permission to those who would prey on people who have no voice? Wouldn’t the immediate outcome of such a choice be the multiplication of evil and the abundance of unjust and gratuitous suffering? How could God be pleased with that?

Taken together, each of these passages and principles motivate me to vote in the 2020 election. I hope you’ll join me!